Hope you are enjoying Summer of Indie! So far I've featured over 30 indie authors and there are about 70 to go.

In this intermission, I wanted to feature a few books from Summer of Indie's biggest supporters. Hope you'll take a look at these books and share.

This year her housemates will be a drama instructor, an accountant, a hip-hop video dancer, a cosmetologist, a calculus professor and a film actor.

For eight weeks sibling rivalry, girlfriend drama, and sexual attractions threaten to change every one of their relationships.

But when one of the housemates faces a tragedy, it affects how all of the friends view life and each other.

Grow your own and save!

Begin to eat healthier and you can save some money also by starting your own garden.

This book based on actual experience can show you how to do it.

Counterfeit engraving plate's worth killing for....

A quest worth dying for...

A love worth risking it all for....or is it just more lies sealed with a Counterfeit Kiss?

Magen MacGuire is determined to find and bring to justice the man that she holds responsible for her father's death. However, on her way to make him pay a tragic case of mistaken identity brings her face to face with the last thing she expects, a handsome stranger she could easily fall in love with.

Jeremy Loud is on a mission to infiltrate and bring to justice an infamous gang of counterfeiters until he wakes up disoriented and in physical pain to find a strange woman busy at his stove. Suddenly, the success of his mission becomes dependent on a woman he barely knows.
http://www.amazon.com/Counterfeit-Kisses-ebook/dp/B006LUI6JA

“Six-Pack of Blood” received Zodiac Entertainment’s “Best Paranormal/Horror” Award. It’s a compilation of six short, malevolent stories by award-winning authors Betty Dravis and Barbara Watkins. Be sure to lock your doors and leave the lights on before reading these bloodcurdling, terrifying tales of revenge, lust, murder, cannibalism, witchcraft and more. Who in the world is safe when such benign things as snow domes, dolls, a Caribbean cruise and an innocent Sunday outing turn malevolent? Blood is everywhere...

***Bugville Critters was recommended by Parenting Magazine and featured in the Wall Street Journal. 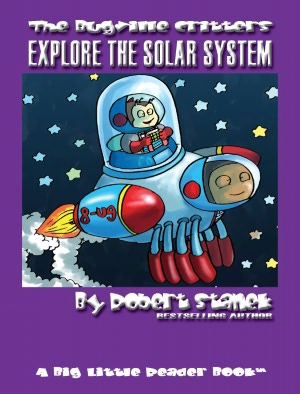 In this story, Buster's imagination takes him on a trip through the solar system on a rocket ship. He sees the earth and moon from space. As he sets off to explore the rest of the solar system, he encounters asteroids and many strange and wonderful sights. The wonderfully-crafted story is paired with energetic illustrations and playful examples that help children discover the world around them and the joy of reading. Other Big Little Reader(tm) stories starring Buster Bee that you may enjoy include: Go to School, Have a Sleepover, Visit Garden Box Farms, Go on Vacation, Play Their First Big Game, and Rush to the Hospital.

Thank you for reading and for your support!