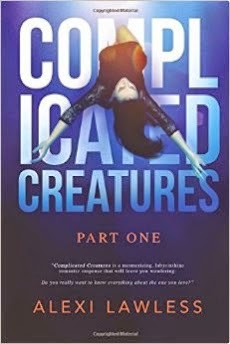 Alexi Lawless is a thriller author, and her debut novel, Complicated Creatures: Part One, sets the stage for a trilogy that features a strong female lead character, Samantha Wyatt.

With her debut novel already hitting Amazon Top 100 lists in International Thrillers & Mysteries as well as Romantic Suspense since its release, Lawless has not stopped writing. She published a novella, Complicated Creatures 1.5, available free on her website at AlexiLawless.com.


"Alexi Lawless is a brilliant writer! Her new emotionally charged provocative novel, Complicated Creatures: Part One, is filled with excitement, sensuality and suspense. Reading it left me breathless more than once, for a variety of reasons and left me wanting for more!" -- Don D. Mann, author of Inside SEAL Team SIX, (Hunt series)

Q & A with Alexi Lawless

Your bio says you craved strong heroines and decided to write what you want to read. Who are your favorite heroines from books, and what do you most enjoy about
them?

From more recent work, I really thoroughly enjoyed Olivia Kaspen’s character in Tarryn Fisher’s The Opportunist and Thief.  She slices like a knife but still manages to be so vulnerable, it’s easy to
relate to her, even if when you’re horrified by her decisions.

Who or what inspired Sam?

Honestly,  I took what I liked most about male leads in some of my favorite stories and turned the whole thing on its head. I started thinking, “What if James Bond were a woman? What if she was the head of the multinational corporation? What if she led a team of commandos from all over the world--what would that be like?”

And as I considered all the possibilities, she became crystal clear in my mind. I saw a modern Pallas Athena with true grit, style and the kind of savvy we admire but rarely see in female characters in a romance genre. Samantha’s no wilting flower, and she doesn’t want for much, so that makes for an intriguing question--what kind of man can get a woman like that? And would she even let him?

I was lucky enough to live in Chicago on-and-off a few years while I was breaking my teeth in corporate and outside of the nine months of winter, I absolutely LOVED that city.  It’s got all the amenities of a major city with a small-town friendliness!  It’s also incredibly easy to get almost anywhere in the world from O’Hare when the jets are running on time, which the traveler in my really loves.

I used to live right off of Michigan Avenue and walk through Grant Park nearly every day, particularly in the summer.  Summertimes in Chicago are unparalleled for me. I thoroughly enjoyed all the music festivals, outdoor art exhibits, and food trucks that city had to offer, in addition to fine cuisine (God Bless Charlie Trotter’s soul, RIP) and of course, the bar scene.

At the time I lived there, The Blackstone was being renovated and I used to think…”Man, I wonder what it must be like to live in a building like that?”  When the hotel finally opened, I treated myself, my mother and my aunt to a weekend there, so when you read scenes about “The
Whitney”, you can better imagine which building I had in mind.

If you’re from Chicago or an avid fan, there’ll be plenty of places and venues in this book you’ll recognize. And if you’ve never been-- I highly recommend a visit, particularly in early summer or early fall.  It’s just a gorgeous city with so many amazing things to offer.
Posted by Go Indie at 7:32 AM No comments: